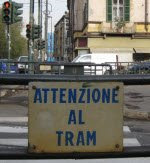 My natural inclination is to stay at home. Travel is supposed to broaden the mind, but it's also been said that "an ass who travels will not return a horse".
Travelling for work frequently has little to do with broadening or enlightenment. I've been guilty of going to Stratford-on-Avon and entirely failing to see, hear, eat, think or do anything connected with Shakespeare.
I'm sometimes embarrassed to admit - especially to those who say that they love the challenge of travel - that I find it an effort to take the first steps out of my hotel and into the street outside. This is particularly true if I can't speak the local language.
People brought up with English as their first language often envy those whose lack of a sufficiently influential local language required them to learn at least one more as a matter of course. Perhaps in previous times the English speaker could feel complacent in the superiority of their native tongue, but in this more politically aware era it seems rather backward to fail to switch smoothly from language to language.
I stopped over in Rome, and the receptionist in the downmarket hotel switched smoothly between English, Italian and French during the few minutes I was there, and the ease with which she did so made me think that she could probably have managed German, Spanish and a few others with equal facility.
I studied Latin for a few years, and that makes Italian both relatively easy and deceptively easy. Because the words are largely familiar, I can read street signs, and get some sense out of menus. Vino is wine, pizza is pizza...
But it's also a trap. On the way to an exhibition in Turin, I asked for directions. I was quite pleased with my almost fluent question in Italian, and it was only when I started to receive my reply that I was reminded of my complete inability to understand what I was being told.
An ass who travels will not return an Italian speaker.
Posted by Unknown at 12:04 pm