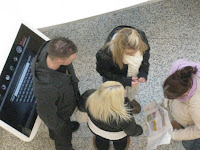 When we talk about computers, we tend to talk about them in terms that imply sophistication. However, another way to think about computers - and information technology in general - is to view them as primitive. I've been thinking about this since a recent visit to the new shopping centre in . (Gina works for in , where they've just finished the Doncaster project, so a visit to the centre was a must.)

We'd arranged to meet some people at a specific store, and on entry to the centre went to a conveniently located information kiosk. This was a sleek and attractive stand-alone pedestal, with a touch screen on either side, so that two people could use the kiosk at the same time.

A lady in front of me was trying unsuccessfully to locate the Jo Malone store. She had a few difficulties. Firstly, she was wearing gloves, so the touch screen didn't register her attempts to press buttons (gloves are quite common in a December!)

Secondly, once she’d entered the first couple of letters and instigated a search, the results displayed were scrollable, but it wasn’t clear what the scope of the results were, so that she was attempting to scroll down past the end of the results list. I watched several other people make the same “mistake”.

The scroll-bar itself was somewhat awkward, with a very small target area; again, this was something that several people struggled with.

I also noticed that when people managed to get a map with the required destination, it was difficult for them to orient themselves. There was a “you are here” indicator, but the map was in a fixed orientation. People would typically swivel around trying to figure out what local landmarks were shown on the map, so they could decide which direction to travel in.

I watched people using the kiosks several times during the course of a morning, and estimate that the overwhelming majority of users were unsuccessful. They typically turned to a staff member, or got a paper map, or just wandered off.

Now, kiosks are a difficult design challenge, and it would be unfair if I were to just complain about these ones – particularly since I spent only a short time watching them being used. However, a few points are worth considering:

Posted by Unknown at 9:21 pm No comments: