Being right-handed, I'd seldom considered the problems faced by left-handed people, except in a purely intellectual sense.

Young Marcus is very strongly left-handed, so I now have a more personal connection - particularly when I see him execute an awkward manoeuvre (opening a door that favours right-handed people, for example). 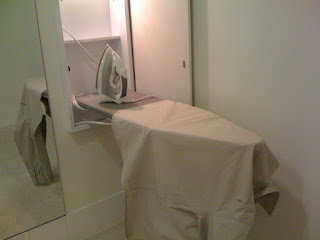 I got some first-hand experience recently when I had to use the ironing-board shown in the photograph (in the upstairs change room at the RACV Club in Melbourne). I hope it was installed by a left-handed person seeking revenge on society. I can tell you that it's extremely awkward for a right-handed person to use, as its location pretty much precludes using your right hand to iron. Standing on the "wrong" side of an ironing board is a strangely unsettling experience. Shane Morris would undoubtedly use the term "cognitive dissonance" to describe it.

Incidentally, there's a very nice Australian term for a left-handed person - a mollydooker (unfortunately seldom used). In Irish, a left-handed person is a ciotóg (pronounced kithogue). I'm not aware of any specific words for right-handed people. Barack Obama, incidentally. Marcus seems to identify with lefties in general; it's one of the reasons he likes Rafael Nadal.
Posted by Unknown at 12:37 am