I think overtly hostile error messages are less common than they used to be. Years ago I was closely involved in an application that included, to my embarrassment, the prompt "Incorrect" (even though the application was supposed to be for exploring people's preferences for categorisation).

But such messages are still out there. Here's one that says "You've entered something incorrectly, you stupid idiot". Actually, it doesn't say "you stupid idiot"; that's implied.

In the real world, there are probably more examples. There's a shop in Melbourne with a door that slides to open. A sign on the door says "Slide! It's not a freaking Rubik's Cube". (I'm not making that up.) 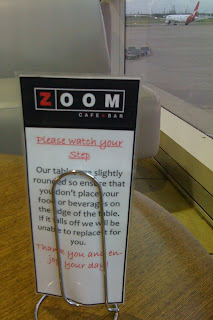 Finally, I came across this friendly little message at an airport. To paraphrase, it says "We have crappy tables and things fall off them. If that happens to you, then tough! Oh, and by the way, have a nice day."