A failure of empathy

Telstra is a major Australian telco. CEO David Thodey has a stated goal of making the organisation more customer focused. This is laudable and necessary. Thodey suggested in June that it could take 5 years to achieve.

It occurred to me recently that Telstra exhibits a failure of empathy. Take as a fairly typical example the notice shown in the image. It informs the customer (me in this instance) that their account is overdue, but it fails to tell me the relevant phone number.

I find it amazing that an organisation can fail so utterly to speak the language of its customers. When I first saw this notice, I didn't know whether it was for my mobile phone or my home phone. I associate my phones with phone numbers, not with account numbers.

Telstra may argue that it's necessary to use account numbers, since some customers will have multiple phone numbers on a single account. This explanation has some credibility when it comes to businesses, but even in that circumstance I would expect to see at least one associated phone number listed.

If anyone involved in the wording of this notice had put themselves in the place of a customer, it would surely have occurred to them that providing a phone number would be extremely useful, and that failing to do so creates (or reinforces) a perception of Telstra as an uncaring monolith. The idea that I should have to go through my records to do the cross-referencing is ludicrous.

In user experience design, we use very simple techniques (such as scenarios and personas) to help put us in the shoes of our users.

On its path to become customer focused, a useful step for Telstra would be to examine at all its outgoing communications, consider the context in which they may be received, and adjust them accordingly.

Posted by Unknown at 1:05 am No comments:

I've often said that everyone does usability testing - but some do it post-release.

These days most organisations tend to do usability testing, at least of important functions, before release. I was surprised, therefore, when Crust Pizza (who do very nice pizzas, by the way) updated their online ordering with a flaw that prevents it working on the iPad - surely an increasingly typical device from which to order. As you can see from the images below, there's a scrollable area in the middle of the screen from which to "customize" one's pizza. This is bad enough on a regular browser (as many people will not notice the scroll bar), but on the iPad the scroll bar doesn't appear at all.

Of course Crust will eventually become aware of this problem (although there is no mechanism to contact "head office" from the website, people can contact individual franchisees). But it is rather an expensive and public way to conduct usability testing. 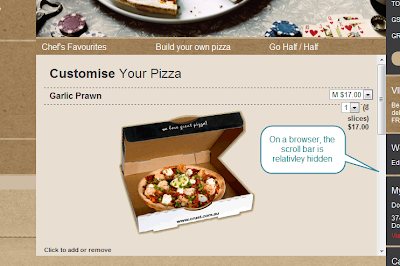 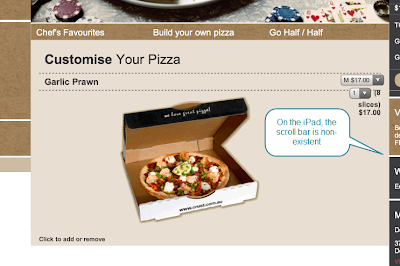 Diving into The Shallows I've often been blasé about the ability to offload memory to the net. Though not a “digital native”, I've been an intensive user of computers for so many years that it's difficult to imagine life without them.

When I started to come across references to Nicholas Carr's book The Shallows: What the Internet is Doing to our Brains, I confess to an initial negative reaction. Perhaps reinforced by some of the reviews I scanned, I had the impression that this might be a book complaining about “young people today” and their dependence on the internet.

When I picked up the book, however, I realised that last year I'd read a previous book of Carr's, The Big Switch: Rewiring the World, from Edison to Google. That's a brilliant discussion of the significance of cloud computing, in which Carr compared the advent of the cloud to the advent of the electric grid, which freed manufacturers from the need to be located adjacent to sources of power (typically running water) and from the need to have in-house expertise in non-core technology.

Perhaps it's telling that I'd forgotten the author's name, since Carr's book focuses much attention on the topic of memory.

Without wanting to do the book an injustice, it's probably fair to summarise it as follows:

The tools we use

The book includes a very detailed analysis of the way in which our tools affect us. Carr contends that tools have a physical affect on our brains, in the way that London taxi drivers develop an enlarged posterior hippocampus due to demands placed by their need to navigate and remember.

He also suggests that those of us involved in the design or deployment of internet technology are not equipped to understand the profound changes that the internet will enable. “The intellectual ethic of a technology is rarely recognized by its inventors,” he writes. “Our ancestors didn't develop or use maps in order to enhance their capacity for conceptual thinking... Nor did they manufacture mechanical clocks to spur the adoption of a more scientific mode of thinking. Those were by-products of the technologies. But what by-products!”

Looking at how the internet may be “re-wiring” our brains, Carr suggest that it presents us with a self-reinforcing medium, encouraging us to think and respond rapidly, but with limited depth. “Links don't just point us to related or supplemental words; they propel us towards them.”

The internet disrupts our concentration and feeds our apparently insatiable appetite for what is new – with email, RSS, updates from Twitter and Facebook, and instant results from Google all feeding an ongoing fascination with the ephemeral.

Carr himself admits to being an addict, and describes the process of temporarily weaning himself away from the constant chatter, as well as the process of readmitting it as he finished his book, when he bought a Blu-ray player with built-in Wi-Fi. “It lets me stream music from Pandora, movies from NetFlix, and videos from YouTube... I have to confess: it's cool. I'm not sure I could live without it.”

The “offloading” of memory to the net is an attractive idea. Why bother remembering boring stuff when we can Google an answer at will? It seems almost perverse to attempt to recollect a trivial detail.

Many of us treat the internet as if it were an extension of human memory. There is an implication that our memory is similar (but perhaps inferior) to silicon. Carr cautions against this view, and states that people who hold it “have been misled by a metaphor.” “Biological memory is alive. Computer memory is not”.

The book contains a fascinating discussion of the role of human memory and its relationship to the ability to think deeply and synthesise.

Carr suggests that there are many pitfalls in our internet usage. Although he is quick to acknowledge – and celebrate – the boons, he also cautions that our tendency to skim has complications. For example, he quotes research suggesting that the ready availability of online sources has resulted in a narrowing of research, with researchers choosing from a a relatively small range of sources whose popularity is further amplified by this very phenomenon.

For a critical look at the machine we're building and the ways in will change our lives, read this fascinating and thoroughly researched book. Carr doesn't suggest how we can retain the benefits while minimizing the risks, but this marks the beginning of a fascinating discussion.