Most of my books are in traditional format, printed on paper. I have a growing collection of online books; I began using an Amazon Kindle over a year ago, and more recently have been using Kindle and iBooks on the iPad.

The online format is particularly suited to technical and text books; these generally don't arouse a significant emotional response, and a purely utilitarian approach suggests that the online format is often the most appropriate. However, I've also been reading (and in some cases, re-reading) novels. 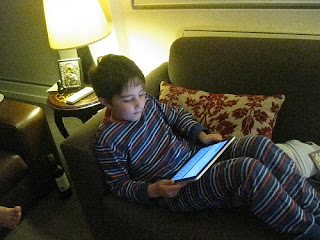 Being of a mind to re-read Flann O'Brien's darkly comic classic, "The Third Policeman" recently, I purchased a copy through Apple's iBooks (since my printed copy is in storage in Melbourne somewhere.)

To my great disappointment and annoyance, it was littered with errors, apparently introduced by optical character recognition (OCR) failures and perpetuated by negligence and a failure to effectively proof-read the final result.

How can Harper Perennial Modern Classics have the temerity, I wonder, to publish an edition of any book - let alone a classic - with such woeful inattention to quality?

Some of the errors were relatively trivial, in the form of omitted opening quotes. Others were more egregious. One of the De Selby commentators is variously referred to as "Hatchjaw" (the correct rendition) and "Hatch jaw". The word "rap" appears in place of "rat". I didn't bother counting, but I estimate that there is an error every 3 pages or so.

Publishers are understandably moving to provide online versions of their catalogues, but treating it as some sort of free lunch is surely an encouragement to potential purchasers to engage in piracy instead. I felt incensed that I'd paid $10 for this flawed version. Unfortunately this is not, in my experience, an isolated incident. I've also encountered quality problems with other books from other publishers.

"The Third Policeman" is extremely funny, dark and bizarre. Flann O'Brien (one of the pseudonyms of the brilliant Brian O'Nolan) was admired by both James Joyce and Samuel Beckett.