Why is Dublin a cycling city?

In September 2010 I was in Dublin for a few days. It seemed to me that in a period of around 18 months (since my previous visit) the city had experienced a cycling renaissance. There were lots of bike on the streets, and every fixed object seemed to have an array of attached bicycles. To my entirely unscientific eye, it seems that a few factors contributed. 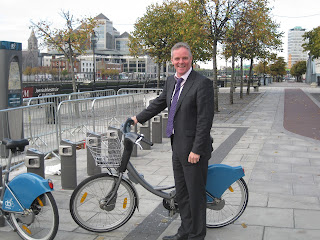 A bike share scheme has proven wildly popular.Unlike the scheme here in Melbourne which has been crippled by mandatory helmet laws, the Dublin scheme has been adopted with gusto, and there are plans to increase the number of bikes from 500 to 5,000.

One thing that impressed me in my short time in Dublin (where I rode as a young adult as cyclists were being marginalised), was the diversity of people using the bike share scheme. I took the accompanying photo down the docks, but it doesn't depict a "typical" user, because I don't think there is one. Users seemed to encompass students, business people, fashionistas, factory hands and drug dealers. There was also a good gender balance (there's a general consensus that cycling cultures only become established when there are as many women as men on bikes.)

Incidentally, when I asked this rather dapper businessman, who was en route to a meeting, whether I could take his photo he said "It's not going to be in the paper or something?" and I assured him not. I hope this usage is acceptable.