There are two rules for businesses establishing or maintaining a social media presence:

1. Monitor the channel
2. Respond to commentary.

A few months ago, I tweeted a somewhat acerbic comment about @museumvictoria. They'd emailed their members an offer for discounted tickets, but when I followed the link, the destination page was missing some functionality required to make the booking.

Within a few minutes my phone rang. A staff member from Museum Victoria wanted to know what the problem was, and how they could help. They sorted out my problem efficiently. A little later they tweeted a general "sorry for the email problem - it's fixed now" comment.

More recently, I tweeted about CityLink in Melbourne:

"Gobsmacked. @citylinkmelb KNOWS website broken. Will be fixed in a MONTH. They let users go through the hoops rather than tell them!"

Several people responded to me, generally saying they'd had similar problems, but there was no reply of any sort from CityLink.

My friend and colleague Fergal Coleman at Symphony3 told me of a discussion he had with a local council that was establishing a social media presence. They were concerned about exposing themselves to negative commentary. "Would you rather not know about the issues," he asked them, "or would you like to have a forum where you can identify and address them?"

Rule 1: Monitor the channel
Never before have companies had the opportunity to get such ready access to first-hand unsolicited input from customers. However, it does require that someone within the company has the task of actually listening. Turning a deaf ear is senseless.

The extent of the attention a company needs to pay depends on the nature and amount of feedback, and a clear plan is required. It may be as simple as having one person who is assigned the task of monitoring mentions on an hourly, daily or ad-hoc basis.

Rule 2: Respond to commentary
Responding to what people say is the essence of the necessary conversation. Thanking people for nice comments is both polite and brand-enhancing. Acknowledging faults, deflecting unwarranted criticism, or explaining why problems may persist all engender trust.

Ignoring commentary, on the other hand, suggests either arrogance or incompetence.

Posted by Unknown at 5:59 pm No comments:

In April 2010 I wrote about my Gazelle Aristo “city bike”.

I was very happy with the Gazelle, but being a bit of a gadget nut I was also keeping my eyes open for other choices. It’s easy to justify a new bicycle every year or so. In fact, my back-of-an-imaginary-envelope calculations tell me that even if I buy a reasonably expensive commuter bike, it pays for itself in less than a year in purely monetary terms.

In November 2010 I bought a Velorbis bicycle (the “Churchill Balloon” model) from Morgans Bicycles in Sydney. 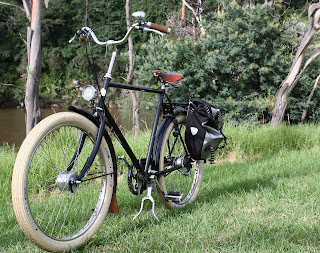 For many people who are considering such a bike, the first question is whether it’s heavy. The answer is definitely “Yes.” At just shy of 18kg, it’s a heavy machine.

It’s certainly possible to carry it up a flight of steps, but I wouldn’t like to do it on a regular basis.

Some enthusiasts will tell you that the weight of a bicycle is of little significance in terms of ease of riding. In my opinion this is nonsense. The Gazelle was  much lighter, and consequently took less energy to ride.

The weight of the Velorbis is offset by the fact that it has 7 gears, so it’s not unreasonably difficult to ride up hills. I rode the bike in Sydney, which is not exactly flat, for some months. Although I never got off and walked (unacceptable loss of face) I did use the lowest gear fairly often, and found riding up from Bondi Beach, for example, to be challenging.

When compared with the Gazelle, the Velorbis also has a less refined feel. The Gazelle is thoroughly modern, and beautifully engineered and constructed. The Velorbis is more reminiscent of the traditional old black bike.

The Velorbis was also a few hundred dollars cheaper than the Gazelle, so I’m not really comparing like-with-like. Nevertheless, I think these impressions give an idea of an essential difference between the two.

Incidentally, I sold my Gazelle very recently, and the new owner is very happy. Ironically, he got its first puncture (ever) within a week.

For several months I had both the Gazelle and the Velorbis (somewhat to Gina’s annoyance), but I found myself using the Velorbis almost exclusively. Despite being heavy and, to my mind, a tad clunky, the Velorbis is just an all-round beautiful machine. If you look at the photos, you’ll see what I mean. It has the classic handlebars, an extremely comfortable Brooks leather saddle, and leather hand grips. It has a certain presence, I think. Sam Butler said that it was like a Daimler, and he thought a police escort would suit it. 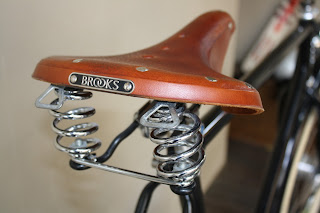 The drum brakes are integrated into the wheel hubs. There’s a dynamo integrated with the front hub, and this powers front and rear lights. There’s a capacitor (or something equivalent) that stores the charge, so the lights stay on for plenty of time after you’ve stopped riding (for example, at traffic lights).

There’s a built-in wheel lock. Again, this is much clunkier than the Gazelle equivalent, requiring a bit of fiddling at times, whereas the Gazelle lock always slid into place without demur. These locks are great for parking at the shops, but someone can still carry the bike off, so for extended parking, or in areas with a high theft risk, I use a bike lock to attach the bike to an immovable object. The Gazelle had a chain that was well-engineered to attach to the wheel lock, but the Velorbis doesn’t have that capability. 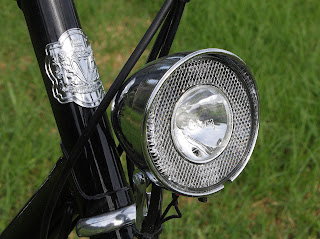 Mudguards are built-in, and work really well. Even when riding through gravel on wet days, I've been spared getting splattered.

The carrier is sturdy. The spec (PDF file) says the load capacity (which I presume means the amount of stuff you can put on the carrier, but I may be wrong) is 50kg. Certainly I frequently give Marcus a ride on the back (which is illegal in Australia. Of course), and although it’s not the most comfortable way for him to travel, it’s convenient when he’s not riding his own bike. The carrier doesn’t have the Gazelle’s built-in elasticised straps (which I miss - they were very handy). It has a little latch sticking out of the right-hand side, supposedly for affixing an attaché case. For me, this merely serves to make it impossible to attach a pannier to the right hand side. I’m always tempted to hacksaw it off, but that feels like vandalism. But one of these days…

I had to replace the pedals after only a few months. One of them had an annoying jiggle on each revolution. A trivial fault that many would probably ignore. I had to do the same thing on the Gazelle. Maybe I'm particularly hard on pedals. I do like to dismount and stand on one pedal while coasting to a stop, so maybe that's got something to do with it.

There’s a built-in kickstand, which is very satisfyingly clunky to operate. It provides pretty good balance, but I have had the bike fall over a couple of times. Well, actually, more than a couple. So I try to be a bit more careful about being on level ground and not leaving a loaded pannier attached.

It came with a really nice, old-fashioned two-tone bell. This was eventually destroyed because of allowing the bike to fall over on that side, so I replaced it with a somewhat unsatisfactory substitute. Most bikes in Australia have a really crappy little thing that makes a little ding when struck with the spring-loaded lever. The two tones are cheerful and polite, but when rung repeatedly and with enthusiasm can also convey a more strident message. (Thanks to Morgans Bicycles for sending me a replacement bell after reading this.)

One of the very noticeable features of the bike is the big tyres. Gina (being the visual design expert) told me to get the shop to fit white ones instead of the brown or black that they suggested, and of course she was right. Again.

The big tyres (Fat Franks) are certainly a factor in making the bike very comfortable to ride, although no doubt they add to the weight and are probably not particularly efficient.

However, I have experienced four punctures in the past several months, which is four more than I’d had for the previous several years, so I may consider changing to tires that are a bit tougher. Then again, maybe not because it's so nice to ride on them.

The gears (SRAM seven-speed hub gears) are, again, clunkier than the Gazelle’s Shimano Nexus eight-speed. There’s a little pause when you change before the new gear engages. I like it, but then I also prefer cars with manual transmission.

Since the Gazelle, I’ve become a fan of hub gears. No awkward ugly derailleurs to bang into things.

(Eunan reminded me that In Flann O’Brien’s brilliant and bizarre novel “The Third Policeman”, there is a discussion of the benefits and disadvantages of the “new-fangled” three-speed gear:

- “It is a power for the hills,” said Gilhaney, “as good as a second pair of pins or a diminutive petrol motor.” -)

Although I’m sure the bike would be largely invisible in many European cities, here in Sydney and Melbourne it’s sufficiently exceptional to attract a lot of commentary and questions, and not only from cyclists. A very polite driver waved me ahead on the hill out of Bondi on a very narrow road, and then politely followed me at 4km per hour as I panted to the top. When he had an opportunity to pass, he rolled down the window, not to remonstrate about the delay, but to admire the bike.  I think the bike strikes a nostalgic chord in a lot of people who no longer ride. At Marcus’ primary school, he telle me the bike is considered “cool”. The closest I’ll ever get to that status, no doubt.

I wouldn’t attempt serious hill climbing on the Velorbis. For example, if I were going for a weekend ride in the Otways (which I haven’t done for ages) I'd borrow someone's mountain bike.

For me, it’s an ideal bike to get around town in a relaxing fashion, and I’m comfortable with the fact that I’m one of the slower people on the road. Yesterday I rode my old Scott “flat-bar road bike” (now Brian’s), and realised that I don’t think I could ever go back to that style of bike again (not that there is anything wrong with the Scott).

Since I wrote my review of the Gazelle a year-and-a-half ago, the cycling situation has changed significantly in Australia. There are far more commuter bikes on the road now, and bike shops that denied their existence two years ago now have a large part of their floor space dedicated to them.

Of course, many of the cheaper models are of relatively poor quality, but it’s nice to see the bicycle rapidly re-emerging as just a regular machine for getting around, rather than something that has to be hurled along at maximum velocity and with legs shaved to minimise drag.

If you’re looking for an elegant, comfortable and utterly pleasant way to commute, I can thoroughly recommend that you consider a Velorbis.

Me, I’ve got my eye out for its successor, but I think it’s going to be hard to beat. Any pointers would be appreciated.
Posted by Unknown at 1:44 am 1 comment: