Walter's Isaacon's biography of Steve Jobs is big (a fact I didn't really appreciate untilI I saw the physical book in my local bookstore). At over 600 pages it doesn't lend itself to rapid reading. However, it's certainly worth the effort. 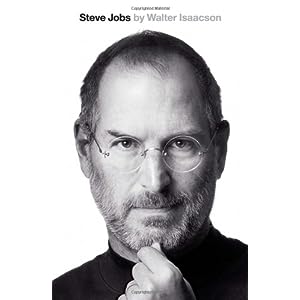 The historical detail on the personal computer industry is fascinating. Jobs was ideally situated in time and place at a nexus where technology, much of it funded by US military expenditure, was becoming sufficiently sophisticated and accessible to enable truly revolutionary developments. Companies like Hewlett-Packard, Westinghouse, Intel and Fairchild were locals. (A young Jobs phoned HP CEO Bill Hewlett when he needed some parts, and ended up working for the company in a junior role.)

Steve Wozniak and others were building rough-and-ready machines that they showcased to their friends. Jobs had the business acumen to see that there was a market beyond the special-interest groups.

Jobs was also at another nexus, that of technology and the liberal arts, and this was a space he consciously and deliberately occupied throughout his adult life.

Of course the book is not primarily about technology, but about Jobs, and the author provides plenty of detail about his origins, including the fact that he was adopted, and that he had a full sister whom he met only as an adult. There is some discussion of whether Jobs' need for control and his tendency to latch onto father figures had their origin in a sense of abandonment.

Jobs learned at least some of his desire for perfection in design from his engineer father's focus on craftsmanship. His father taught him that it was important to craft properly even the parts you could not see, such as the backs of cabinets. Later, Jobs would insist that the internal parts of Apple devices were pleasing to look at, rejecting for example a circuit board in which the lines were not straight. We might consider it obsessive, but this perfectionism is very much at the core of what made Apple such a successful company.

From a user experience perspective, the book is fascinating. An early partner in Apple, Mark Markkula, wrote "The Apple Marketing Philosophy" which stressed empathy, focus and imputation. The need to impute - to assign a value by inference - was enormously influential. Jobs embraced the concept, and it is apparent in the attention to detail, presentation and branding that has epitomised Apple for most of its existence. For example, the packaging on your new MacBook Air or iPhone imputes the quality of the machine it contains. The little folded cloth that came with your iMac is not just a nice touch, but the essence of how Apple would attempt to communicate a message not only through the product itself, but through the entire customer experience.

The book is full of fascinating stories (the lifelong interest in Zen, the interaction with Sculley, the relationship with Disney, the obsessive diets and issues of personal hygiene) and quotations ("I hate the way people use slide presentations instead of thinking." "We make progress by eliminating things, by removing the superfluous.") It's also an interesting exploration of two conflicting philosophies; open or closed systems. This is particularly relevant at the moment with the release of iCloud - will Apple be able to move the digital hub to the cloud, and still maintain a closed and controlled environment for its users?

The author is clearly sympathetic to Jobs the person, although he doesn't shy from discussing his negative and destructive characteristics. Jobs was frequently bullying in his behaviour. His focus on delivering a high-quality user experience didn't often extend to the people he had to deal with. He could be cold, hostile, destructive or distant.

It's a telling point that when he was close to death, he told the author that the reason why he'd cooperated with the biography, despite being worried about it, was that "I wanted my kids to know me. I wasn't always there for them, and I wanted them to know why and to understand what I did."

The book is thorough, and reading it will take you on a journey though a great deal of key moments and decisions in the recent history of IT, personal computing, movies, music and publishing. I forgave its length because none of the content was irrelevant. It is well structured and clearly written.

It's also an important book, because Jobs and the people with whom collaborated, or with whom he competed or fought, have been key drivers of the technology that now pervades our environment.

Posted by Unknown at 5:13 pm No comments: