Smoking rates in Australia have been dropping for some time. Figures depend on your source, of course, but it appears that around 20% of adults, or fewer, are daily smokers.

Various policies have helped the decline. There is active promotion of "quit" messaging, including highly graphic and emotive TV advertising. Smoking is prohibited in workplaces, restaurants and the like, and prohibitions are being extended to include many open areas (such as beaches).

Possibly the most overtly hostile action from the Government is the introduction of plain packaging laws. From December 1, 2012, tobacco companies will be required to remove all branding, other than the brand name, from cigarette packages. You can see the proposed pack in the first picture.

The tobacco industry is alarmed, and has challenged the proposed law in the High Court on constitutional grounds. The ruling is not expected for some months, so it will be interesting to see what happens.

Recently Peter Stuyvesant (owned by British American Tobacco) has been selling its cigarettes in a spiffy metal case, with the regular pack of cigarettes inside. This is seen by many as a way to circumvent the plain packaging laws. Assuming that the law is upheld in the High Court, then the metal case would be in breach of the law if it continued to be sold.

Presumably the company hopes that people will keep the metal boxes and use them to contain their plain package cigarettes after the law comes into force.

The term "plain" packaging is clearly a misnomer. The packaging is far from plain, but is an overt attempt to dissuade the consumer from using the product, adorned as it is with ugly and vivid imagery of disease and illness.

It seems to me that having one's brand associated with such overwhelmingly negative images must be undesirable. On the upside, all the cigarette manufacturers are in the same position.

I bought one of the new metal packs the other day. (I don't smoke.) The same negative messages are dominant, as the photos show. However, the stylised "Peter Stuyvesant" logo is stamped into the case, and this will presumably outlast the paint job. I don't know whether the paint used for the anti-smoking messages will last as long as the imprint of the New York subway map (which is part of the branding). However, I do know that even after all the paint has worn off, the Peter Stuyvesant logo will remain, apparent to sight and touch.

Presumably that justifies the cost of producing the special edition packaging. It will be interesting to see if other manufacturers follow suit.

Should I buy a cargo bike?

Many years ago, when I visited Seattle, a friend picked me up from the airport in what Americans would probably call a "sub-compact". As we drove into the city, she told me that most people in Seattle had big cars (I don't know if the term SUV even existed in those days) "in case they accidentally go to the mountains one weekend".

John Berenyi once told me that when buying a car, people make a choice, then do a lot of research, and then buy the car that they wanted anyway.

This is all by way of introducing my current dilemma. I have a Velorbis bike that I love. (I've written about it previously.) But I rode a Bullitt cargo bike a few months ago, for about 5 minutes, and kind of fell in love with it. Ever since, I've been looking for an excuse not only to buy a cargo bike, but to buy the Bullitt.

I've started an in-house campaign (literally, a campaign in my house) to purchase one.

There are alternatives. Cargo bikes are starting to proliferate in Melbourne, and there are a few players. For example, there's cargobike.com.au, who do nice stuff, and there's the Gazelle Cabby. I rode a Cabby a few years ago (when I bought my Gazelle, (which I also wrote about), from Commuter Cycles, and I remember liking it.

The real dilemma, however, is that if I buy a cargo bike I'll have to get rid of the Velorbis, because I can't really justify having both. I sold the Gazelle to Alex, Marcus' long-time sports coach (who is very happy with it, by the way) shortly after I bought the Velorbis. 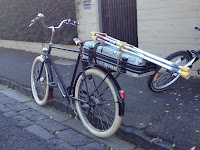 When I mention to people (who, generally speaking, don't see bikes as "normal" transport) that I'm thinking of buying a cargo bike, they always ask me why I want one, and I always ask them why they, or my neighbours, wanted a (generally exceedingly ugly) SUV. The answer, of course, is that I don't need a logical reason.

The Velorbis is capable of carrying quite a large load. For example, it's carried Marcus in the past. It can carry a case of Heineken. (I don't look as good as the person in the photo here, but the case of Heineken looks the same.)

Most recently, I've carried Marcus' saxophone and (temporary) crutches on it to and from school, as shown in the photo. Surely I've made my case by now that I need to make that purchase?