Gobsmacked. What a great word. It usually describes a fleeting or momentary sensation of utter surprise.

Public Transport Victoria released a new iPhone app back in April 2012 to replace a predecessor. The predecessor was by no means brilliant, but it worked reasonably well. People could use it to find timetables and plan trips on buses and tains (and trams, although the brilliant TramTracker occupies a much-loved spot in the Melbourne commuter's heart by providing real-time data on tram movements).

The new app was a disaster. Users hated it. Twitter was awash with complaints. Mainstream media concurred.

This is where the gobsmacking began. Instead of acknowledging a major screw-up, PTV blamed the users. The CEO said "...the thing we really did wrong here wasn't so much the new app - people are not used to it; it's got lots of great features."  (http://www.abc.net.au/local/stories/2012/05/03/3494817.htm). A spokesperson said "We expect it will take time for people to get used to it …" (http://www.theage.com.au/digital-life/smartphone-apps/passengers-blast-updated-app-for-public-transport-20120423-1xhf8.html)

Public pressure eventually forced PTV to reinstate the original ("Classic" - of course) app. And very many people - probably most - installed or re-installed this, and continue to use it. Those who continue to use the original without re-installing get a warning message every time they run it, stating that it's no longer maintained. But that's another story and another set of disgruntled customers.

However, the gobsmacking persists, because PTV continues to provide the new version, which in the App store is touted as "the one-stop-shop for Victorian transport information". 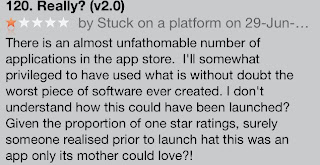 As I write, there are 3,873 reviews, and the average rating is one star. Many of the reviews state that were it possible to award zero stars, they would do so.

Let's put aside any consideration of the quality of the app (although I must say that in my professional opinion it's unusable), and consider merely the way in which PTV has dealt with the feedback.

Surely you'd notice? In the real world, if almost 4,000 people told you that a product you provided was useless and worse, you'd at least stop selling or promoting it? If you did not stop, the only reasonable assumption would be that you are inept beyond all reason, or that you have a desire to deliberately antagonise your customers and sully your band. If you did not stop providing the product, surely your customers would be gobsmacked.

Just in case the correct course of action is insufficiently clear to PTV, two steps are necessary:

- an unreserved apology for releasing an ill-conceived product. (Actually, this step is optional, because at this stage who cares?)

- removing the offending app from the App store. Forthwith.

This is also an object lesson in the need to validate your design with end users before rolling it out - particularly when it comes to mobile apps.