I’ve had personal and business accounts with National Australia Bank (NAB) for over 20 years.

Over those years I’ve had mostly adequate service with the occasional reminder that I was dealing with a monolith.

One experience has been fascinating. Here, for your amusement and edification, is the story.

In November 2013 I decided to close an overdraft account, so I paid it off in full (via an online transfer) and sent a notice to the bank, via their “secure message” service, that I wanted to close the account.

The next day I received a reply thanking me, letting me know that my enquiry was important, and that a “mortgage servicing representative” would contact me within 2 days.

Naturally, I was gratified to know that my enquiry was important. I would hate to have submitted an unimportant enquiry. I hadn’t realised my instruction was just an enquiry, but I wasn’t going to be upset by semantics. 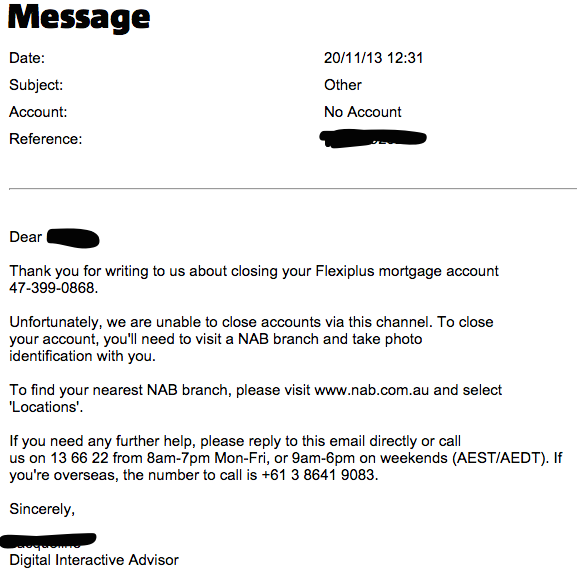 The next day, I received another message, telling me that the bank was “unable to close accounts via this channel,” and requesting me to visit a branch, bringing with me photo identification.

I have to admit that I was a tad surprised. Over several years, I had moved many thousands of dollars into and out of this account, and other accounts I hold with the bank. Why, I wondered, could I authorise such payments and transactions, but not carry out what seemed to me such a simple request?

Being, perhaps, naïve, I sent another message, that asked, simply, “Why?”

The answer I received did not answer my question, but it did at least apologise for the inconvenience being foisted upon me. The message said “We require to meet you face to face, to complete forms to close your account.”

Was I, I wondered, being unreasonable? Perhaps the bank in its wisdom had some good reason for asking me to attend in person to carry out a sacred account-closing rite. And perhaps my question “Why?” was in some way ambiguous, as it had not been answered.

So I sent another message: “Thanks, but this still does not answer my question: Why?” 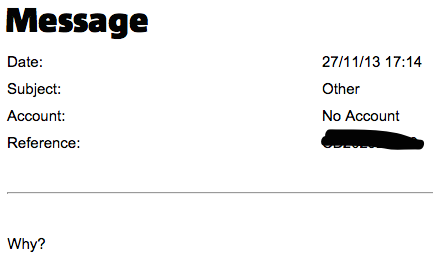 The next message I received told me that the account could not be closed “via this messaging service.” Perhaps, I realised, the messaging service – referred to by NAB as “secure message,” was not, in fact, secure. Perhaps there had been a spate of spurious or fraudulent account-closings and the bank was forced to clamp down on this internet thing and fall back on tried and trusted methods.

Of course I understood this predicament entirely, and sympathised with the bank’s dilemma. Of course they needed paper forms to be filled in! So I duly wrote: “Please mail me the account closure form and I’ll sign it (witnessed if need be.)”

“There!” I thought, “problem solved.” 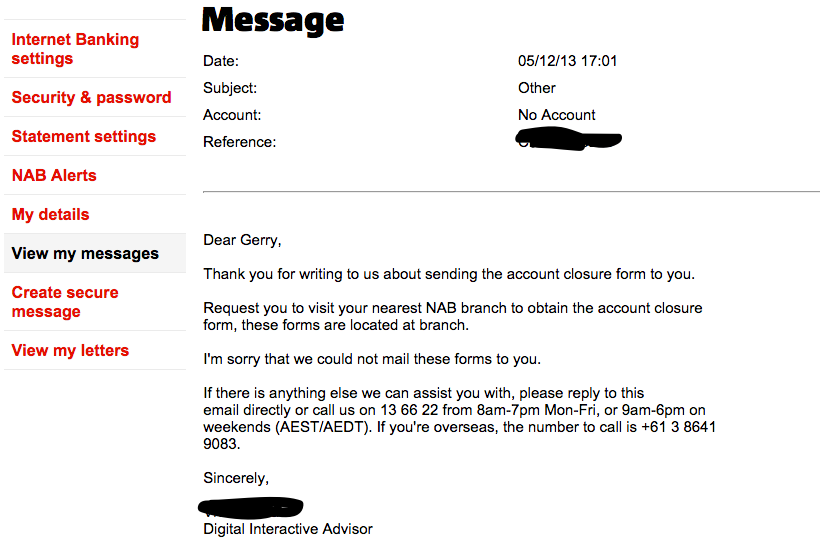 But no! The very next message, although it thanked me for “writing to us about sending the account closure forms,” pointed out that “these forms are located at branch,” and said “I’m sorry that we could not mail these forms to you.” It also said “Request you to visit your nearest NAB branch…”

The language, I noticed, was becoming somewhat brusque. An icy tone was creeping into the messages. Perhaps I had – inadvertently of course – upset somebody?

These messages, oddly, were from people whose signature blocks said they were “Digital Interactive Advisors.” I wondered why an “interactive advisor,” and a “digital” one at that, would be advising me to not interact on a digital channel.

Our relationship had apparently entered stormy waters. My next message said “I’m sorry you cannot mail the forms to me. I cannot visit my nearest branch.” But I also held out an olive branch, a path towards a peaceful resolution: “Presumably,” I wrote, “this is a cost-saving measure. I hereby authorise you to deduct $0.55 from any one of my accounts to cover postage.” (Yes, that was in the good old days, when a stamp cost  a mere half a dollar or so.)

I felt I had been entirely reasonable, and was full of giddy expectation of the imminent arrival of a suite of forms that I could sign, have witnessed, and submit in the old-fashioned way, thereby achieving an entirely satisfactory conclusion to this multi-week drama that had made my life so full and interesting.

Alas, and imagine my disappointment at receiving yet another message that “…you must attend an NAB branch along with your Drivers Licence… as you must be ID’d to complete the request.”

Apparently an impasse had been reached. Despite my many attempts, despite offering to cover postage, to have forms witnessed, and to generally do anything (short of visiting “an NAB branch”), NAB was putting down its foot, was refusing to acknowledge the legitimacy of its online channel, and was generally being recalcitrant and uncompromising.

Since there was no money in the account, and I had no intention of ever using it again, and had told the bank of my decision and intent, I let the matter lie.

Nine months after instigating the request, NAB decided to charge me $395 for “fees”.

Now their wily ways were clear! They never wanted me to close the account! I'd been taken in by their clever ruse.

I wondered, then, what would have happened had I fallen into their trap of attending “an NAB branch”. My drivers licence would have perhaps proven inadequate or insufficient. The person who had the keys to the forms cupboard would have been unavailable that day, having encountered illness or accident or personal catastrophe. Or perhaps, in a clever Catch-22, I would have been told that the account could not be closed “via the branch channel”’ and that I would have to apply online.

I can only bow before such superior tactics.

Like Dave in “2001-A space odyssey” pleading for HAL to “Open the pod bay doors,” I have received the answer of the machine.

(HAL/NAB:) “I know that you… were planning to disconnect me. And I'm afraid that's something I cannot allow to happen.”